The mission of That Yarn Store is to provide a neighborhood hangout nook for both seasoned knitters and crocheters and for those just starting out. We offer workshops, groups, comfy couches, and of course quality yarns and supplies.

Introducing the owners and workers of That Yarn Store: 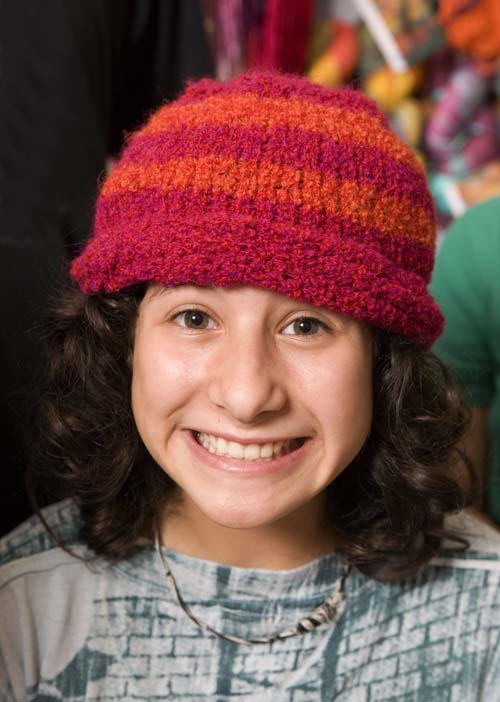 Lily:
This is Liliane Sage, also known as Phred. She grew up on the mean streets of Borneo and likes to dress in Aqua Marine. She is the grit in your fries. She enjoys James Dean, movie theatres, card slaps and death traps, and how playdoh smells. And soda pop, just because that's a funny name for it. Calisthenics is a hilarious word, in the eyes of Liliane Sage. 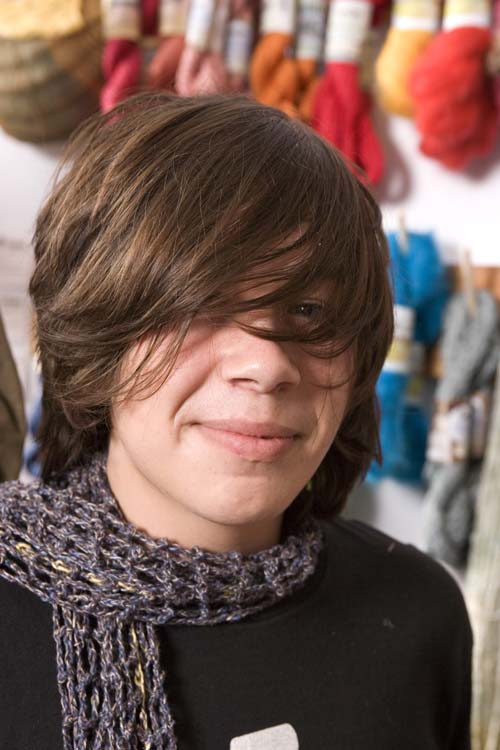 Noah:
Noah was born and grew up on the streets of Borneo. He has since been caught, domesticated and house broken. 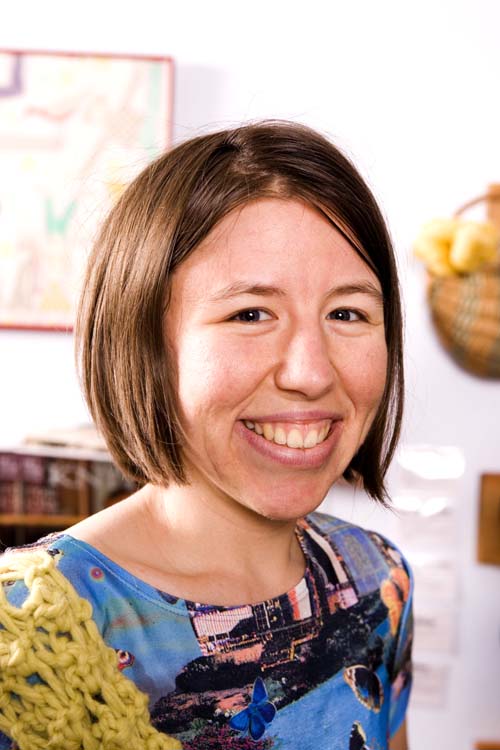 Thea:
Thea was born on the streets of Bornio, approximately 2.8 cm west of Borneo. Thea learned how to knit while still in the womb, much to the chagrin of her mother. At age one hour Thea knit her first pair of diapers, which was much harder than you would imagine considering the fact that she had no control over her extremities. Nothing worth mentioning happened for the next twenty years. She is now living in England and is continuing to nothing worth repeating. 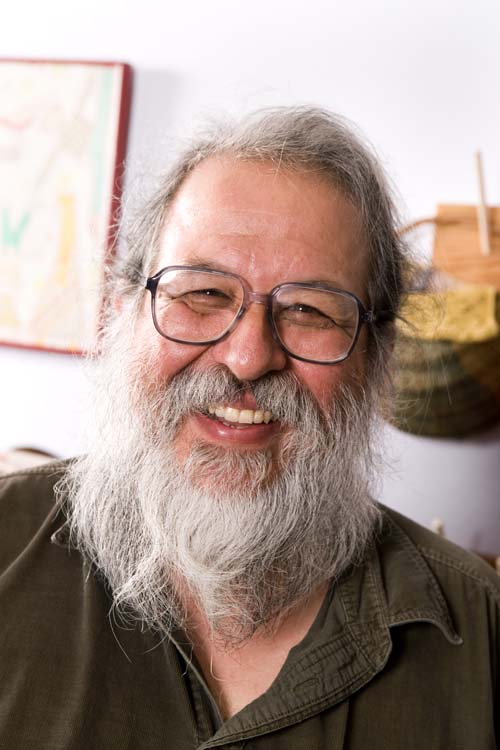 David:
David Orozco is considered by many, well by a very few, to be one of the world's greatest authorities. He is committed, and in fact will insist on sharing his knowledge with you.
Mr. Orozco was orphaned at an early age by a freak philatelist accident. He was raised by a group of roving itinerant Los Angeles hairdressers who refused to drive. He was forced, by necessity, to make his own clothes with only chopsticks, bits of lint, and hair. He shares his thus acquired knowledge of yarnery with you. His hobbies include writing about himself in the third person.
After 3.7 decades of nearly total monastic study, Mr. David Orozco holds an Associates degree from Absorbine Jr. College. 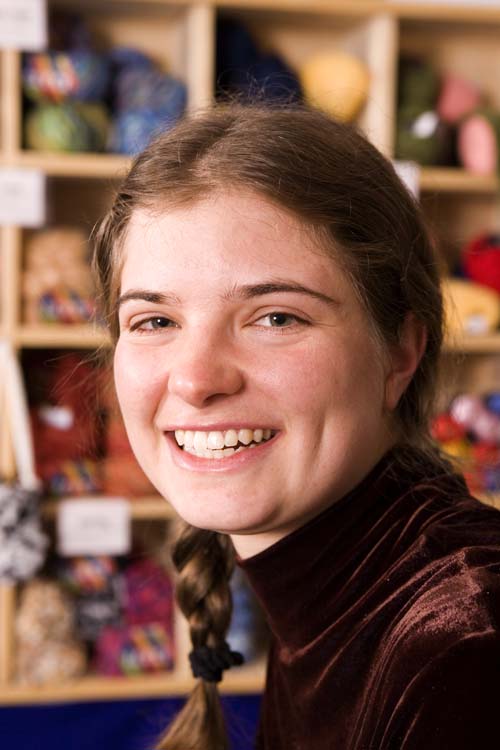 Jessamy:
Jessamy is just an in-law. She claims she was born on neither the streets of Borneo nor Bornio, but is instead from Ipoh. She really did teach herself to knit using chopsticks and was once stabbed to the bone in a freak knitting accident involving size 3 double pointed aluminum needles, a chest of drawers, and a ringing telephone. Nevertheless, she is glad to get out of Catholic school teaching and is now studying in England.

Frannie:
I knit, therefore I am. Sarah:
Sarah, the matriarch of the group, is pictured sitting amidst the group, basket in hand.
On the run from youth’s indiscretions and sorrows, Sarah wound up in Los Angeles with a boxful of letters and drawings of pomegranates mostly, and the trunks of trees. A stint as a taxi driver in Boyle Heights, a headful of unkempt hair dyed red, a greedy curiosity for the world's great stage, which one day featured a band of itinerant hairdressers who refused to drive. Their beautiful nephew cut her hair and changed her life. What came after is the story of her life with David, Frannie, Thea, Hana, Max, Noah, and Lily, a rabbit named Benjamin who lived to be ten, and a phantom golden retriever named Moss who will be here soon.


That Yarn Store - in the Press
Look we're famous!

LA Times, Calendar Section, Nov. 16th
[...]
Late on a Wednesday morning, David Orozco is sitting on a floral couch knitting a baby blanket. Barefoot and bearded, he isn't the sort of owner you'd imagine for a yarn shop, but this isn't your average knitting store. In addition to offering classes and selling yarns made from bamboo, hemp and yak hair, the store is a community gathering spot of sorts. Set up like a living room, with a couple of well-worn couches and rocking chairs, this strip-mall outpost regularly hosts special events, including a monthly Spin a Good Yarn Night (where knitters share stories while working their needles), yarn swaps and Spanish conversation nights.

The concept is "a place where people could come and hang out and talk and have it be supported by a business," said Orozco, 55, who runs the shop with his wife and two of his six children. He chose Eagle Rock because the retail space is fairly inexpensive and "the cultural mix of the community is such that there's all kinds of people here and all kinds of economics."

This place is more than a knit shop: It’s an art gallery, a literary salon, even a language-immersion center. On Spin a Good Yarn night, patrons read poetry, passages from novels, or just a good joke; Friday Night Fun might mean a movie or live music underscored by the soothing click-click of knitting needles; on Spanish Conversation nights, knitters are invited to habla español. Owners David Orozco and Sarah Todd, along with their brood of eccentric kids (ask them about Borneo), are constantly thinking of new activities to keep knitters from feeling lonesome. Their upcoming Yarn Swap and Thanksgiving Leftovers night (November 24) is a clever way to use up uneaten stuffing and old balls of leftover yarn. There are weekly classes for beginners, a Men’s Only night and — just in time for holiday generosity — a Quick Gifts class (Saturday, December 9). That Yarn Store, 1578 #4 W. Colorado Blvd., Eagle Rock, (323) 256-YARN or http://thatyarnstore.com.

LA City Beat - 7 days
9/14/06
HUMAN TOUCH
Most objects and adornments feel better in your hands if you sense the hands that made them. All day today through Sunday, see handcrafted fine art and objects, including creations by more than 45 jewelers working in a wide range of materials, at the 1st Annual Santa Monica Arts Festival (Santa Monica Civic Auditorium, 1855 Main St.; $7.50, $6.50 seniors, free for kids under 12; Americanartsfestival.com). Hourly demonstrations throughout the weekend include ceramics, water color, and weaving. But if it’s fiber that really gets you going, hit That Yarn Store in Eagle Rock, where this evening they’re holding a “Singles Night” so people of both sexes, any sexual orientation, and all knitting skill levels, can needle each other in search of true love (1578 W. Colorado Blvd., 323-256-9276; 6 p.m.-9 p.m.; free; Thatyarnstore.com).

Got a yarn to tell? Don’t know yarns that well? Satisfy both needs tonight at That Yarn Store in Eagle Rock. The family-owned, “community-oriented gathering place” is hosting its second “Spin a Good Yarn Night,” featuring poetry, jokes, improv, and other kinds of ways to tell a story while your hands are busy making mittens, or scarves, or a sexy ’70s crochet bikini. Bring your needles, or your active storytelling or listening skills, and see what “purls” your pals will come up with. Say, isn’t that James Frey in the corner? 7 p.m. Free. 1578 W. Colorado Blvd., Eagle Rock, (323) 256-9276. Thatyarnstore.com.